In a previous blog post Ashwin Willemse and the critics of South African rugby in the 1980’s I concluded that, maybe those so critical of South African rugby in the 1980’s like Gareth Stead, Pieter du Toit and Christi van der Westhuizen and others, are not fully aware of the strides made during that period already in starting to transform the sport, which yes still far from the ideal, in part laid the foundation for the post-Apartheid era of in rugby in South Africa and the full unification of the sport in 1992. I want to therefore highlight some of the milestones achieved in this regard (whilst fully acknowledging that it will not be a complete picture as SARU did not participate in any SARB sanctioned tournaments in the 1970’s/1980’s).

I will follow it up with a second blog post to highlight some of the milestones achieved under the umbrella of SARB towards non-racial rugby in the late 1970’s and the 1980’s.

NON-RACIAL RUGBY PRIOR TO UNIFICATION IN NOVEMBER 1977

1971 – In December 1971 the Proteas embarked on a six-match tour of Britain and Holland – the first “coloured” rugby team to tour abroad. They achieved two wins, a draw and three losses. Cuthbert Loriston, the Proteas’ team manager and SARFF’s first president, explained that the purpose of the tour was ” ‘to test our strength’ and that the two wins, a draw, and three losses proved that ” ‘we have the technical know-how and enthusiasm to build strong opposition within the next five years'”. Loriston said that the next steps would be to play against white teams that tour South Africa, such as England’s intended visit in 1972; to play white South African teams; and then move towards integration of sports.

1972 – On 22 May 1972, the Proteas side lost narrowly 11 – 6 to John Pullin’s touring England side in Cape Town. England had undertaken a short, unbeaten seven match tour to the Republic and whilst the headlines in the UK were mostly about his side’s shock 18–9 test match victory against the Springboks, it should be noted that the Proteas versus England fixture is the first reported international rugby match in which coloureds played against whites on South African soil.

1972 – On 24 May 1972 the Leopards played against John Pullin’s touring England side in Port Elizabeth, losing by 36 – 3. The team was captained by Norman Mbiko Never-say-die Mbiko.

Captain Norman Mbiko in action against the England touring side.

1973 – The Leopards played a test against the touring Italian national team in Port Elizabeth. For the Italians, who were undertaking a tour of the then Rhodesia and South Africa, it was only the second time that the Azzuris had ventured outside of Europe after a short tour of Madagascar, their 24-4 victory against the Leopards amounted to their only success of the nine matches played.

1974 – On Tuesday 4 June 1974 the Proteas played against the touring British Lions side at the Goodwood Showground in Cape Town. Fly-half Errol Tobias scored the only points (a penalty and a drop-kick) for the Proteas, who were beaten 37 – 6 by the visitors. The team included Hennie Shields, John Noble, Turkey Shields, and Doug Dyers. For the Lions, centre Dick Milliken, wing JPR Williams, lock Gordon Brown, flank and captain Fergus Slattery scored a try each. Fullback Andy Irvine (a conversion, three penalty kicks) and fly-half Alan Old (two penalties) also contributed.

1974 – On 9 July 1974 the Leopards met the British Lions at Sisa Dukashe Stadium in Mdtantsane. The team was captained by hooker Thompson Magxala and included lock Liston Ntshongwana and Morgan Cushe at 8th Man. The lightweight Leopards were no match, losing 56-10 and often pleading with the referee not to award scrums against them. Still, they had talent: Toto Tsotsobe was a quicksilver winger, and Charles Mgweba a dangerous three-quarter. Their chief attacking weapon, however, was Morgan Cushe; the clash at Mdantsane would be the making of him. 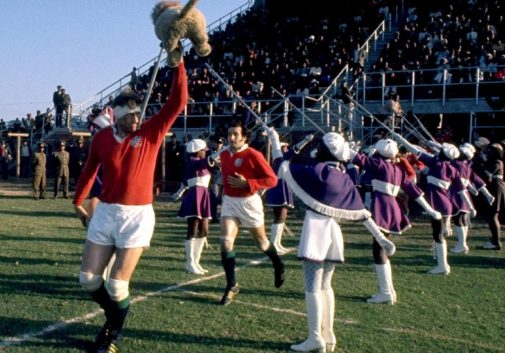 Cushe was a master of the open game and prospered against the Lions, making a nuisance of himself defensively and intercepting a pass, only to be hauled down agonizingly short of the line. In one of the Leopards’ few attacking moves he hared downfield to hysterical shouts from the crowd before slipping the ball to Mgweba to score. The Springboks hadn’t managed a try in two tests, and the provinces were finding it increasingly difficult to breach the Lions’ line. For the 30 000 crowd the try was as sweet as a victory.

1974 – The Leopards undertook the first tour by a black South African rugby team abroad when they embarked on their reciprocal month-long tour of Italy in 1974. The Leopards were also “the first South African team to tour Italy”. The squad had 25 players and played in six fixtures, winning one against Zebre in Milan, drawing against the Italian U23 side and losing four including a 25-10 defeat in the “test” defeat against the Italian national side in Brescia, the only occasion when the margin of loss was by more than one score.

Morgan Cushe in this article Selling out or scrumming down? describes the tour to Italy as one of his best rugby moments.

“His happiest tour was arguably to Italy with the Leopards in the months prior to the famous Mdantsane match against the Lions, when the Leopards played against Brescia, Lazio, the Dogi (an invitation side) and the Italians themselves on a six-match tour.

Finding himself in Rome on a day off, the girls chic and the cappuchinos smooth, Cushe spotted a jacket he just had to buy. Speaking no Italian, he looked frantically for the team’s bus driver, Luciano, to act as interpreter and find out the price. Luciano was nowhere to be found and at first Cushe lacked the courage to open up a conversation in pidgin Italian, worrying that the jacket might be bought by someone else.

But, eventually, he could wait no longer. He spent most of his meagre allowance on the purchase, bringing it home to South Africa like the blazer he never had.”

1975 – This year saw the French undertake an eleven match tour to South Africa which included two tests. Many of the 1974 Leopard team featured against the touring French side on 2 June 1975 when the teams met in Mdantsane with the French emerging as comfortable winners, 39-9. 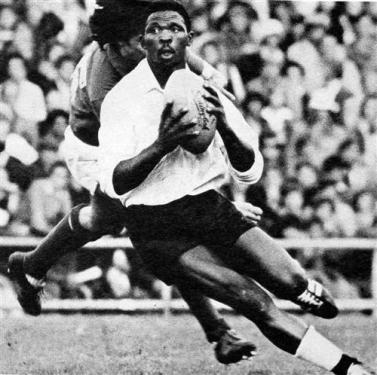 Morgan Cushe playing for the Leopards against the French touring side in 1975.

The captain of the Leopards against the French, Mpenduli “Liston” Ntshongwana, passed away in 2017 and SA Rugby paid tribute to former national skipper . He had pace, excellent handling skills and a massive kicking range. Contemporary sport writers described Ntshongwana as being “able to transform a beaten side into a lively set” and a versatile player as well as “a good leader, he runs well with the ball and tackles effectively”. Renowned former rugby historian, the late Vuyisa Qunta, listed Ntshongwana as one of the best Number 7 flankers in African rugby and therefore a sure choice for his ‘dream team’ after Ben Malamba. 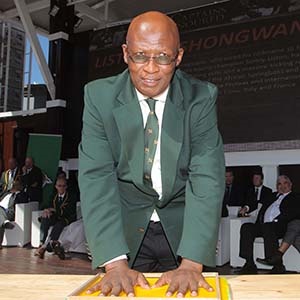 Mpenduli “Liston” Ntshongwana who captained the Leopards against the French

1975 – The French played their third tour fixture against the Proteas at Goodwood in Cape Town on 4 June 1975 winning by a comfortable 37–3 margin.

1975 – It was perhaps the events that unfurled at Newlands some three days which resonated louder when a South African Invitation XV, the first officially mixed-race team (containing white, black and coloured players) ever fielded in South Africa ran out 18–3 winners against the touring French side. Twenty-one-year old John Noble, one of the two Federation (Proteas) players in the side, scored the try of the match, running down the right wing like a shot from a cannon to swallow-dive onto Dawie Snyman’s grubber kick and score in the corner just before half-time. Prop Turkey Shields was the other Federation player in the Invitation XV while the Leopards (SARA) supplied wing Toto Tsotsobe and Morgan Cushe.

John Noble on the far left together with his teammates (including Morgan Cushe) that would play against the 1976 All Blacks as members of a SA Invitation XV (see post below). Tommy Symons pictured far right played club rugby with my dad. 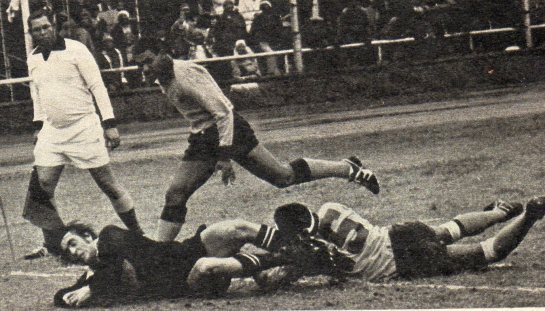 Lyn Jaffray scoring against the Proteas with Ronnie Louw and Clive Noble too late to stop him.

The full-strength All Black team included players such as Laurie Mains, Bill Osborne, Sid Going, Andy Leslie, Frank Oliver and Lawrie Knight. Among the Proteas were John Noble, Ronnie Louw and Charles Williams (who would later go on to represent the South African Barbarians side who toured Britain in 1979).

One of the other Protea players was Piet Boonzaaier who played at lock and who described this match against the All Blacks as the highlight of his career, in fact he described it as a test. He passed away in 2017 and in this article Een van SA Rugby se grootes ten ruste gele his former teammates bemoaned the lack of respect he and others that played rugby under SARFF received for what they did for the cause non-racial rugby in South Africa prior to 1990 (both the Western Province Rugby Union and the South African Rugby Union failed to attend his funeral). After 1992 he supported the All Blacks in protest against the fact that the former SARFF players and administrators were sidelined in favour of those that were aligned the SACOS affiliated SARU. 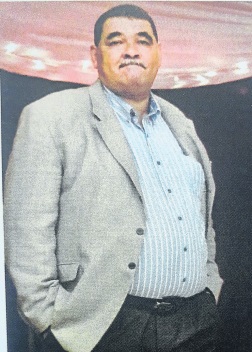 1976 – The 1976 All Blacks touring team played the 4th match of the tour against a SA Invitation XV on 10 July 1976 at Newlands in Cape Town. The SA Invitation team lost 31 -24 and included four persons of colour including Ronnie Louw at full-back, John Noble on the wing, Morgan Cushe at flank and Broadness Cono at hooker.

The multi-racial SA Invitation XV playing against the 1976 All Blacks, with Morgan Cushe, Ronnie Louw and John Noble looking on as the All Blacks scored a try

1976 – The touring All Blacks were the fifth touring overseas side to play against the Leopards. The fixture which took place on 31 August 1976 saw the New Zealanders running out comfortable winners 31-0 in Mdantsane. The Leopards side still contained seven of the line up which has featured against the 1974 British Isles side. 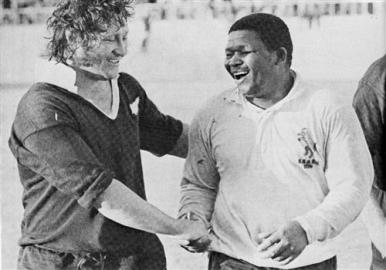 Best of pals, Kent Lambert and Broadness Cona leaving the field after the Leopards match at East London.